Born and raised in New Hampshire, Rick Ayotte explored the woods and waterways, and studied the animals that crept and flew and swam. In 1978, Ayotte entered hitherto unexplored territory when he began to create wildlife art with glass. Today, his naturalistic portrayals of wildlife, represented in their natural habitat, are renowned throughout the world. Ayotte’s most simply defined artistic goal is “to create a little world in a sea of color.” Being an admirer of the antique paperweight makers, Ayotte developed his works along the classic models of the French glasshouses of Baccarat, Saint Louis, and Clichy: the spherical presentation, the optical qualities of crystal, and the use of color to seduce the eye. Ayotte, however, has left the nineteenth century far behind in terms of subject matter. After graduating high school in 1962, Ayotte began a ten-year career as a scientific glassblower, working for the Macalaster Scientific Corporation. He became adroit with glass and its malleable properties, and created small lampwork figurines to sell at giftshops. Paul Stankard, a colleague from Macalaster, who had already begun his auspicious career as a paperweight artist, encouraged Ayotte’s talent. Stankard showed him his botanicals, and Ayotte was instantly motivated to go further, to develop his lampwork skills and successfully capture his works under glass. “There was something pleasing and intimate about the spherical shape of paperweights that really appealed to me,”Ayotte said. “It opened a lot of doors for me artistically.” In the late 70s and early 80s, Ayotte began to create his world in glass in earnest. Among his first editions are aviaries of birds that range from his beloved eastern bluebirds, to tropical keel-billed toucans. During the arc of these early years, some designs appear rough. Because his imagery is honest and forthright, however–like sketches or photographs from an ornithologist’s field book–the birds are all compelling, rather than sentimental or kitschy. The studied postures, and the careful coloring add to their believability. Ayotte worked very intensively, and developed a technique where he used glass rods, like a brush, to create subtle color blends, allowing for smoother transitions. In this manner, Ayotte created a series of paperweights entitled Glasscapes, where imagery appeared painted and encased in glass. This style propelled Ayotte to explore other non-traditional presentations, and he began to incorporate more scenery and flora into his compositions. These designs led Ayotte to create upright, three-dimensional paperweight presentations, as well as more floral related work. Ayotte references the past, and the Victorian floral craze, in glass bouquets, which he began to exhibit in the 1990s. He brings the flowers to vivid, full-bloom life with his trademark eye for detail and the same authenticity he bestows on his birds and creatures. The petals, pistils, stamens, even leaf patterns, are carefully realized and represented. Although, perhaps Ayotte allows a little more nineteenth-century indulgence in some of his flamboyant floral works. In the case of his sumptuous American Beauty roses or brilliant daffodils, they are almost hyper-real. Appearing so vigorous and so verdant, swelling under the glass domes, they could likely outgrow the crystal. They represent the virtuoso technique Ayotte has developed by himself and for himself, not from any other artist’s influence or craft-market fad, just a personal relationship with the beauty of nature. “My whole life I’ve had an enthusiasm for getting close to wild things,” Ayotte explains. “When you capture that special energy in a piece, it really comes to life.” For over two decades, Ayotte has studied glass, lived in a glassworker’s habitat, and mastered the fluid medium’s character. He has created some of the most vivid paperweight designs, in motifs all his own, bringing an authentic and essential nature to the interior of the glass, and achieving his “little world” superbly. When he is not in his art studio, Ayotte continues to investigate ponds, and birdwatches in the New Hampshire wilderness. “My goal has always been to interpret nature with a fresh eye; to share the drama I see all around me. Most importantly, I want to remind others of their own stories by telling them some of mine.” In a very tangible way Ayotte promotes an ideal, which was glorified over a century ago by Thoreau, and other American wildlife artists and advocates. In artful compositions, with just a handful of glass, Ayotte exhibits and preserves the truly unique and precious. 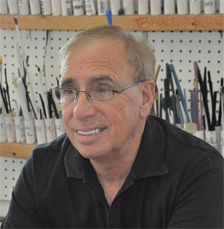