James Joseph D’Onofrio was born on April 4, 1951 in Gibbstown, New Jersey. He has three grown children, Nicole, Matthew and Timmy. After high school Jim attended Gloucester State College, then earned his BA degree in Fine Arts and Art Education at Glassboro State College in Glassboro, New Jersey. Trained as a sculptor, he worked mainly in wood. Jim’s introduction to glass came in a somewhat unusual way. For eight years, 1981-1988, he worked as a studio assistant for nationally acclaimed paperweight artist, Paul Stankard. In Paul’s studio D’Onofrio learned and became an expert in the glass lampworking technique. He helped design and create the plants, flowers and root people used in Paul’s weights and botanicals. At the end of 1988 D’Onofrio left Stankard Studios to pursue his own artistic career. By 1991 most of Jim’s energies were being devoted to making glass paperweights, many featuring desert scenes. His 1992 move to Carefree, Arizona took him to the area that had been providing inspiration for his work. Jim still lives in that area though he stopped making weights a few years ago. Jim’s earliest weights were original interpretations of the desert then conceptually he moved to the opposite extreme, giving us a glimpse of the rainforest. These weights present us with an amazing variety of poison-dart frogs in their habitation. In this world ablaze with yellow, orange and purple frogs, an occasional green frog rested on a lily plant. Jim’s creativity and sense of telling a story have added much to the art of glass paperweights. He is a superb lampworker whose imagination, when at his best, reminds us of long lost childhood memories or introduces us to worlds we have never seen. 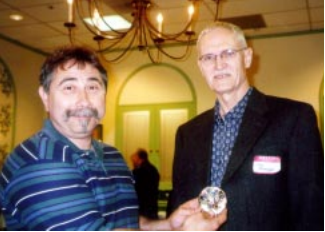