Debbie Tarsitano was born in Valley Stream, Long Island, New York in 1955, to a family with keen interests in the arts and collecting. In the 1960’s, Debbie started private instruction in painting, drawing, and watercolor. At age 11, she participated in her first public art show, selling a painting. She attended auctions with her father, Delmo, discovering art glass. Inquisitive in nature, an autodidactic, Tarsitano felt an immediate sense of wonder and a desire to learn more. Glass was a shared obsession with her father. In 1972, they purchased their first flameworking torch, working on a card table in their garage. In 1976, Debbie and Delmo launched Tarsitano Studio, each pursuing their own individual one of a kind artworks. Self-taught, the two frequently visited New York’s Sotheby’s and Christies, studying art glass hands on. While developing her glass artwork, Debbie earned a Bachelor of Fine Arts, and an Associate’s Degree in Journalism from Hofstra University, Long Island, New York. A chance meeting with Roland (Max) Erlacher, master engraver from Steuben, led to a 25-year relationship designing engravings and combining them with encased flamework. Wildly popular, these painterly works told stories in glass and sold all over the world. Tarsitano and Erlacher created portraits and scenes depicting Anne Frank, Mother Theresa, and multiple ambitious works including “The Outstretched Hand of Liberty,” the story of American immigration through Ellis Island, New York. In the 1980’s Debbie broke from tradition, sculpting hot glass in abstract shapes. She created dimensional, multilevel artworks using molten crystal. Working with Edward Poore, master glass cutter, Tarsitano introduced optical effects enlivening the work, changing perception for the viewer. Throughout the 1980’s, Debbie continued to tell stories in glass, bridging the gap between glass and painting, two of her greatest loves. After Delmo Tarsitano’s death in 1991, Debbie forged a new path alone, meeting the many challenges of starting over. That year she joined the artistic community in The Studio at the Corning Museum of Glass. Relationships there transformed Tarsitano’s thinking and expanded her technical knowledge. Today she is a popular guest instructor in The Studio. Armed with new insights, Debbie pushed the limits of glass, creating more and more intricate painterly works. In 2000, Debbie invented a transformational new vocabulary for herself and her work, creating “Filament” grounds, hair thin glass fibers used to create texture, as well as millefiori canes representing biological cells. She introduced new motifs, using flameworked human portraits. Abstracted snakes slid in rivers of complex millefiori. Surrealistic scenes led to encased collages containing many elements and abstract patterns. Debbie innovated on the idea of collage, using oil paint and hot glass elements. In 2001, Debbie returned to her roots in painting, filling the studio with canvases and mediums from sign paint to oils. She experimented late into the night, placing painted glass pieces in the snow and rain, testing their archival nature. Debbie covered sculptures with painted canvas; sign paints replaced cutting and engraving. In “The Dream” (collection: Corning Museum of Glass), sculpted glass became a canvas. 2006 brought many significant developments; Debbie created a large canvas inspired by her favorite painting by Gauguin (collection: MFA Boston), “Where Do We Come From? What Are We? Where Are We Going?” Her work, “Who Are We? What Are We Doing? What Have We Done?”, is a combination of glass and oil paint on canvas. It depicts an exotic scene featuring a figure embodying the effects of genetic engineering. The work implies how genetics impacts our society, morals and world health. Debbie met Venetian Meistro Dino Rosin, master of large glass sculpture. Together they made “Lens Fantasia,” a large glass sculpture with encased flamework and a painted outer history of Debbie’s career. A friendship with artist Jiri Harcuba of the Czech Republic led to interest in “Wabi Sabi,” finding beauty in the imperfect. Wabi Sabi would remain with her and influence new artworks. In 2010, Debbie studied with artists Shinichi and Kimiake Higuchi of Japan at The Studio at the Corning Museum of Glass. She envisioned cast elements as a bridge combining painting and glass. By 2014, a 38-year artistic career came full circle, resulting in the combination of cast glass and oil painted canvas covered board. The new work depicts a wide variety of subject matter. Today Tarsitano continues to develop the new work in her Westford, Massachusetts studio. 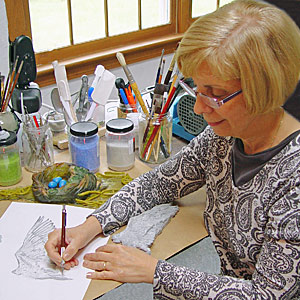